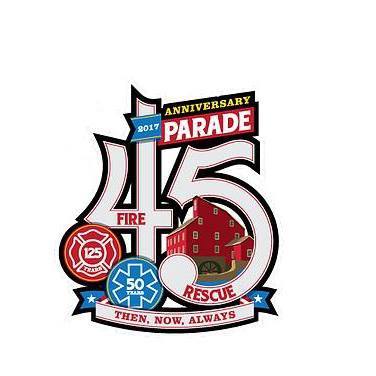 In 2018, CFARS will be celebrating our 50th Anniversary of service to our communities, along side of the Town of Clinton's celebration of 125 years of service.  A parade to commemorate both events will be held in 2017.  Check out the celebrations website at http://www.clintonfirerescueparade.com/ 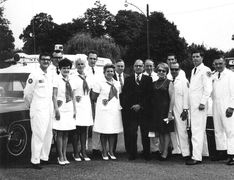 Volunteers – 148 and counting – and two dozen paid staff members work together to serve the Town of Clinton, Clinton Township, Union Township, Lebanon Borough, and Franklin Township and through mutual aid agreements and contracts the balance of Hunterdon County.

The Squad offers the Emergency Medical Technician course as well as regular training in cutting-edge emergency medical and rescue techniques and equipment at its own training facility. In addition to training CFARS volunteers and employees, Clinton instructors teach others from around the area. Thanks to a new partnership with Hunterdon County Polytech, high school students from around the county can now take the EMT course for credit toward graduation and a volunteer or paid career.
Here are some highlights from the continuing CFARS story.

The Founding of CFARS
Founded in response to the drowning of a child, Clinton First Aid & Rescue Squad (CFARS) began serving the community on Aug. 1, 1968.

The entire community was in mourning over the tragedy when three friends, Bob Ballantine, Clark Allen, and Wayne Jones gathered in Mr. Ballantine's Annandale living room, determined to do something that might save the next person in a medical emergency.

“There wasn't any ambulance service close by, and the three of us said, 'We've got to get a rescue squad,” Mr. Ballantine remembered. “Response time for Clinton area residents was the impetus,” Mr. Allen said.

The Squad “was a necessary thing the area definitely needed,” said CFARS Volunteer and Historian Dave Dalrymple. Previously, the closest ambulances came from High Bridge and Flemington, and in an emergency, every minute shaved off a response time is precious.

The Squad’s first headquarters was the old fire department building on East Main Street – half of which stands today as the Clinton Book Store. “It was unused and dilapidated, but with that single bay for an ambulance and with an upstairs meeting room,” said Mr. Allen, who is now 80 and living in South Florida.

“One of the first steps we had to take was to get an ambulance, and we got one from Manville,” Mr. Ballantine said. The Manville squad charged Clinton $1 for the 1953 Ford. “After that, we picked up a Cadillac ambulance from Blairstown,” said Mr. Ballantine, now 82. The second ambulance was free.

The 13 charter members signed up for American Red Cross First Aid Training, as back then, a Red Cross First Aid card was all that was required to provide ambulance service, Mr. Ballantine said. Calls were made to the High Bridge, Pattenburg, Flemington and White House squads to determine what parts of their territory they would surrender for Clinton to service, and so Clinton began serving the Town of Clinton, Clinton Township, the Town of Lebanon, and Franklin Township, later adding Eastern Union Township and Southern Lebanon Township as well.

Just as they do now, members signed up for duty shifts. “The day shift was composed of people who lived or worked in the (Town of) Clinton area, and could get to the vehicles during the day,” Mr. Ballantine said. He worked for Ingersoll Rand, and at the time was an industrial engineer in Phillipsburg, NJ. “I would take the night shift.”

During his duty weeks, Mr. Ballantine listened for the sounds of the radio-like Plectron box, which brought emergency tones and the dispatcher's voice into his home. Unlike today's county-wide, two-way radio system and cell phone alerts, communication was one-way only. “We couldn't talk back,” Mr. Ballantine remembered. “When that thing went off, you had a call and you went.”

At first, the telephone number set up for emergencies was routed to a 24-hour telephone operator at a local prison. The Squad switched to the county-wide Hunterdon Communications Center system in 1976.

“Money, of course, was an issue,” Mr. Allen said.  CFARS members reached out to municipal leaders for funding.  “The town of Clinton stepped up, and other municipalities contributed modestly,” he said. “I can only imagine their discussions about the appeal from this strange group from Clinton with their $1 ambulance!”

Reached through direct mail, newspaper stories, and members knocking on doors, residents and the business community supported the growing squad, said Mr. Ballantine, who served as squad president from 1969 to 1971.

In its infancy, the Squad cobbled a budget together with municipal contributions, community donations, and the proceeds of weekly bingo games, a yearly auction and other fundraisers, Mr. Ballantine said.  It was a relatively small number of people handling everything: The emergency medical care and hospital transit, the running of the organization, and the fundraising to pay for it all.

“Our volunteers were few in the early days,” said Current Clinton First Aid & Rescue Chief Frank Setnicky. “But the community wasn’t as large, and we weren’t nearly as busy back then – we answered 260 calls in our first year.”

A bigger HQ, then a new one
Mr. Allen was a vice president of sales for a health and beauty care company in Jersey City. With that marketing background, he wrote letters and other literature seeking volunteers and donations from residents and larger donations from those in a position to make them. Contributions grew significantly once the Squad began making emergency calls. “Philip Hofmann, then President of Johnson & Johnson and an area resident, provided significant financial support and other "major" donors followed suit,” Mr. Allen said. Municipalities increased their annual subsidies.

The Squad was confident enough in these funding sources to seek a mortgage and buy their current property on Old Highway 22. Members donated their carpentry and plumbing skills and spent weekends modifying the space to make it suitable for a first aid squad.

Fundraising efforts had to be increased to make the mortgage payments and begin purchasing new vehicles and life-saving equipment. Volunteers ran weekly bingo games and cooked hamburgers for the hungry players to buy.  A yearly auction, with the donated leadership of a member who was also an auctioneer, offered all manner of goods for purchase, rather like a pop-up flea market, Mr. Ballantine remembered.

The old telephone company building has since been replaced by the new, modern building CFARS inhabits today. While close in footprint to the old building, the current two-story station is nothing like its predecessor. It has drive-through bays, an exhaust evacuation system, a radio room, administration offices, a conference room, a meeting/training room, a kitchen, bunk rooms for men and women, an exercise room, and a lounge.

While the current facilities were under construction, CFARS took up temporary headquarters in trailers on the Clinton Fire Department property. The headquarters’ grand opening was held in 2005.

A volunteer-run organization supplemented with paid staff
By the mid-90s, it had become harder to find volunteers who either worked locally and were permitted to leave work, or were otherwise available to respond to calls during the week, from 9 to 5.  A commitment to provide 24-hour, seven-day-a-week care and transport to the community to hire career staff to cover those hours.

Today, about two-dozen paid EMTs and nearly 150 volunteers form a strong team, all of whom have met the same training requirements.  CFARS’s paid daytime team means the Squad is also able to cover neighboring communities during workdays.

EMS Training
During the 1970s, the federal government instituted a national training program that established the concept of the EMT – Emergency Medical Technician. Each state has customized requirements. In New Jersey, ambulance crew members can either have basic EMT certification or paramedic level. Paid and volunteer EMTs all meet the same standards. While some Clinton EMTs are certified paramedics, CFARS requires basic EMT certification only.

The word “basic” does not fully convey all that EMTs can do, especially as training requirements have increased.

When CFARS started, most of the medical assessment and treatment were the responsibility of doctors and nurses, so volunteers’ top priority was transport. Now, assessment is done and many treatments given by Clinton EMTs.  Research has shown that “the earlier treatments can be given, the better off (patients) are going to be,” said CFARS Training Lieutenant Michelle Gardner.

Terrorism response became more of a focus after the Sept. 2001 attack on the World Trade Center. A CFARS ambulance and crew were part of the county task force that went to Manhattan that Tuesday, and the squad sent ambulances and crews over the next five days.  In the aftermath, New Jersey developed a regional EMS task force for major mass casualty incidents. As a part of the task force, CFARS has a staging unit trailer and an all-terrain ambulance, both of which can be used locally at any time.

CFARS provides on-site training not only to its volunteer members and paid staff, but to EMTs and EMTs-in-training from around the region. The Clinton First Aid Squad Training Center enrolled its first class of EMT students in January 2015. Instructors provide all the courses needed to prepare for the state EMT certification exam.

The first Polytech High School partnership students graduated in May 2017.

A Focus on Rescue
The “rescue” in Clinton First Aid & Rescue Squad means members are fully trained and equipped to remove people from dangerous situations on both land and water.
Land rescues include vehicular accidents and situations where the victim is not easily accessible, such as in a collapsed building or in a manhole. CFARS’s service area includes many bodies of water, including Round Valley Reservoir. This means personnel must be ready to respond to accidents and other emergencies on the water.

The Squad got its first boat – a simple aluminum jon boat – in the 1970s. The next decade, a high-tech Zodiac inflatable rescue boat was purchased. The squad began to train in both dive and surface ice rescue.

The squad purchased its first set of powered hydraulic rescue tools to rescue people trapped in crashed vehicles in 1985. In 1986, a heavy duty rescue truck was built for the Squad – a vehicle that carried significant amounts of rescue tools, rope equipment, breathing air and the ability to refill not SCUBA tanks but firefighter SCBA bottles.

CFARS, Flemington-Raritan First Aid and Rescue Squad, Whitehouse Rescue Squad, Lambertville New Hope Ambulance and Rescue Squad and the Hunterdon County Office of Emergency Management together formed the Hunterdon County Technical Rescue Task Force, in which each agency has taken the lead on a specific technical rescue skill, sharing skills and training expertise with the others. In early 1991, CFARS began training in its specialty area, trench rescue, and continues to provide world-class training programs at the county emergency services training center to other task force members.

Some things never change
As you have read, much has changed in the fifty years since CFARS was founded. To recap, the Squad has grown from 13 volunteers to 148 and growing, plus two dozen paid EMTs who cover duty shifts when volunteers are not available. The Squad that launched with a $1 ambulance and a free ambulance now has six ambulances, a heavy rescue truck, a water rescue support truck, a supervisors unit, a support unit, four rescue boats, a REHAB Medical Support truck, an off-road, all-terrain ambulance, an Incident Support trailer and a Technical Rescue Trailer.  In its first year of operation, CFARS responded to 260 calls. In 2016, it responded to 3,402 calls - a 1,209% increase! The Squad now accommodates a huge jump in training requirements at its own Training Center.

“But not everything has changed,” Chief Setnicky said. “The Clinton First Aid and Rescue Squad is still a volunteer-based organization with the same mission it always had: Providing high-quality, professional Emergency Medical Care for the sick and injured.”

Proudly Serving the Town of Clinton, Clinton Township, Lebanon Boro, and portions of Franklin and Union Townships since 1968